"Hey guys!  I think I should sleep in Momma's bed tonight so we can all be together as a family!" - he knows how to pull on my heartstrings!

On the 13th, he decided he needed to get dressed all by himself, because "I'M A BIG BOY NOW!"  He also learned to ride his bike (with training wheels) on the 13th.  I told him Momma needed him to slow down on this "growing up" thing!

He told us he wants to go to school now.

He does not want us to have anymore babies.  I asked why and he said, we already have one and points to Zoey!  He's sticking to this logic so apparently one sibling getting into his toys is all he can handle :)
Posted by Leah at 11:57 AM 1 comment:

This is completely random, but Zoey's 13 month update none the less!

Zoey started walking on 11-3-16.  She is still very temperamental about it, but she CAN do it, when he feels like it.  She knows it is faster to crawl, so that is still how she gets around for the most part.

She is at a fun stage.  She likes to make us laugh, can be loving, loves to eat, but she is still cuddly and baby-like when she's tired. She learned to wink last week.  That pretty much means she blinks very quick-like or flutters her eyes.  It's hilarious!

Zoey got a play kitchen for her birthday and loves making a mess with all of the dishes. I've noticed she loves playing with things in a container - where she can take items out and put items in over and over again. She enjoys the kitchen cabinets and loves when I allow her to help loading the dishwasher.

She loves putting clothes in the dryer.  LOVES taking baths.  She is Chase's shadow and is pretty obsessed with Daddy these days as well.

Zoey goes to Grandma Herring's Sunday School class on Sunday evenings. She thinks she is one of the big kids coloring, singing and snacking!

She picks the marshmallows out of cereal and throws the rest on the floor.  She is messy and strong-willed.  She tries to fake cough, loves playing hide-n-seek with Chase & Daddy, and sleeps SO well through the night.  She still takes 1-2 naps during the day.

She is a talker and is trying to say so many words:
Posted by Leah at 8:00 AM No comments:

Nathan asked Chase how his day was when he got him out of the car.
Without a second thought, Chase responded back,
"your day ok, Daddy?"

Chase likes the song, God is on the Move by 7eventh Time Down.
While riding in the car he asked, "Can you turn on On the Know, On the Know?"
which is what he sings instead of "On the Move, On the Move".

11-4-16
I was clipping Chase's nails while he was watching cartoons.  There was a fun song on that he was trying to dance to by moving his hands and feet all around.  I reminder him he had to hold still and couldn't dance while I clipped his nails.  He finally responded that his FEET were SINGING!

Recently...
I ask Chase if he's my buddy, he says "yeah!"
Nathan will then ask him, "Well are you my buddy too?"
Chase will look at me kind of hesitant and then say,
"I both of your buddy...we a family!"
He is all about being together as a FAMILY right now!

Chase kept asking me what was on my forehead.  I had just been helping the kids with supper and assumed I had somehow managed to get food on my face.  After his persistence I finally realized he was referring to the wrinkles or stress lines on my forehead! :(  I very sadly explained those were caused by him! lol  Now while I really didn't tell him that, I do believe I told him they were stress lines and we could just drop it now!  #mommaneedsbotox
Posted by Leah at 11:33 AM No comments:

So a lot of time has passed since I've posted.
A lot has happened in our lives, yet the craziness still feels the same ;)
I came out here this week to clean up the blog...
get rid of some of the more pointless posts and realized while I was out here that I kind of missed it.
I had embraced Instagram and tried to post there, even updates on the kids.
...but the updates there are vague and I'd like a place to note all of the funny things they are doing and saying these days.
I also realized I wanted a place to jot down some thoughts.
So here I am... blogging again!
Posted by Leah at 9:08 PM No comments:

I need to hurry and get this update out here because her 5 month "birthday" is going to roll around in just a few days!

Zoey > 3 months old
You are so much fun, Zoey, and we all adore you.  Buuuuuut you are dramatic, girl!  We joke that you have two temperaments - happy and mad.  There is NO in between with you!  We have no warning that mad is going to happen, you're just THERE! ha  I think that means you're going to be a handful, but we'll take it! :)

You love attention and as long as you're fed, talked to or held, you stay pretty happy.
Chase adores you and you seem to think he is pretty great too.
You are in size 2 diapers and 3-6 months clothes.
You normally sleep 8+ hours at night before you wake up for a bottle.  No complaints there! 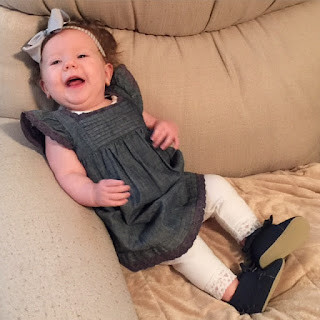 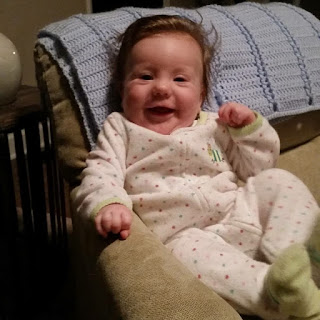 Zoey > 4 months old
You are still in 3-6 months clothes and size 2 diapers.
You weigh 14.8 pounds (75%) and are 25.5 inches long (90%)
You love to eat!
You are starting to have longer periods of happy time where you just play and observe things during the day.
You rolled over this past month!  (belly to back)
You still normally sleep 8+ hours at night.  (go down around 7:30/8:00 pm)
Your day naps are not consistent, but you normally take 2-3 naps during the day still.
You are reaching out to grab things a lot!
You are chewing on toys or your hands.
You love to snuggle.
You try to sit up if we lay you down like a BABY.
You like when Mommy uses the carrier so you can keep moving.
You seem to like your swing a little bit better.
Your hair just keeps getting longer and crazier! :) 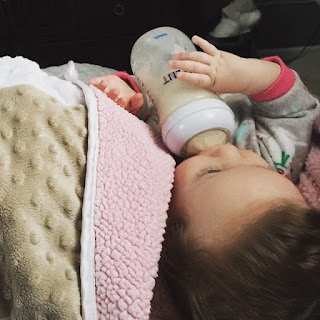 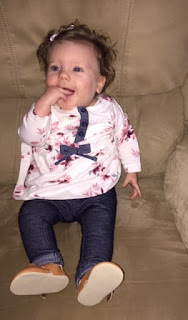 ...journaling our memories before I completely forget everything! 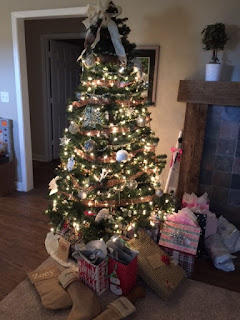 After an enjoyable (but chaotic) week of celebrations, we were able to stay home on Christmas morning and open presents with just the kiddos.  Chase was so exhausted with the change in his schedule and the chaos of walking in the door and dropping off new toys he'd opened, yet not getting to play with them!  Once we talked him into opening presents and showed him what he could play with, he was excited again!  He's still at the "easy to please" stage when it comes to presents.  It was so fun for Nathan & I to pick things out for him! 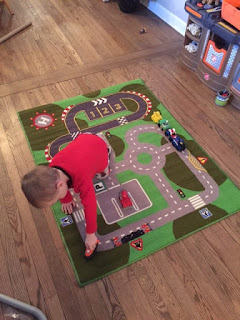 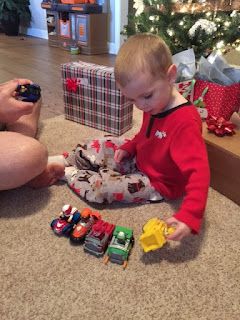 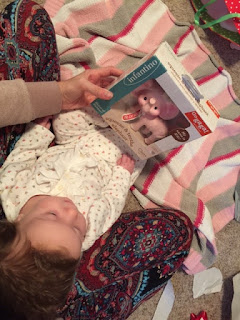 Christmas Sunday outfits...had to catch them both on the go as still shots aren't something I get much of anymore! :) 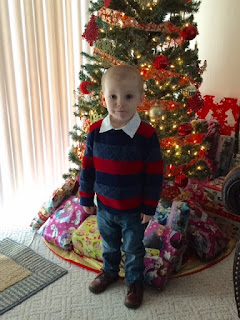 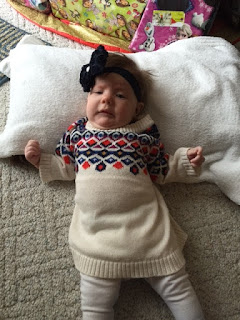 We had a scare with Hunter the week after Christmas.  We noticed he wasn't acting right, but we hadn't been home much to know if he was just pouting or what.  By Wednesday he wasn't eating and wouldn't get up off his bed.  It was breaking my heart.  We coaxed him inside and he just wanted Nathan to love on him.

We called the vet and they had us bring him in the next morning.  They had to put him under and do a scan because his abdomen seemed tender, but thankfully it ended up just being an infection that they treated with antibiotics.  Within a few days his swollen eyes were looking better and he wasn't quite so pathetic. He really knows how to work us...but $500 later, he was bouncing around the yard again! 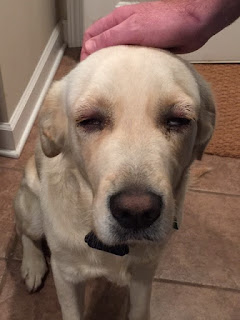 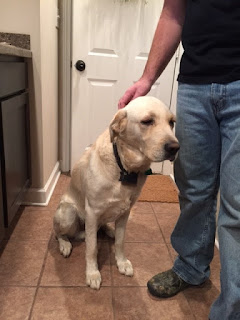 We had Zoey's baby dedication on Sunday, December 27th.  Both of my brothers were home for Christmas so it worked out perfect!  After a busy week of Christmas celebrations, we were all exhausted!

We were so thankful to have Nathan's Dad pray over Zoey, my Dad offer up the Courageous pledge with Nathan and then our Pastor give us direction as parents.  It's such an important step when I think about raising my children to serve God. 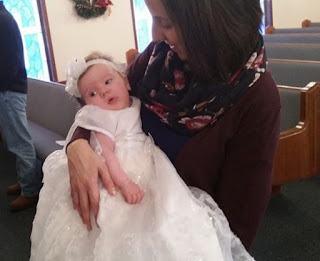 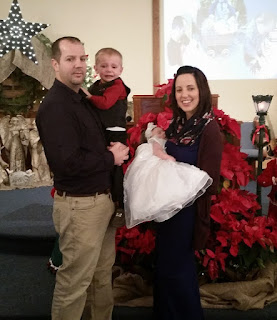 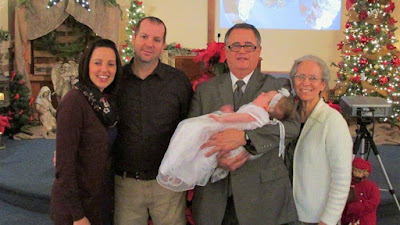 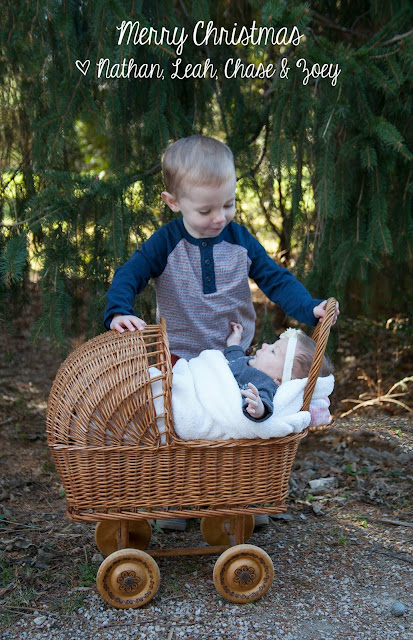 Leah
I love everyday fashion, decorating and thrifting. I'm a bit of a HGTV and murder mystery addict. This blog is a little about my world... maybe a few recipes, pictures that inspire my decorating touches, and other random thoughts about remixing my life! I share stories about my marriage and babies...be prepared for the mushiness! :)